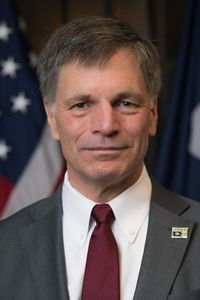 The Wyoming Game and Fish Department has again turned down local biologists’ proposal to add birds to a tiny, isolated sage grouse population that dwells up the Gros Ventre River basin in order to avert its total collapse.... more

As a creditor called for greater oversight and the judge set hard deadlines, the lawyer for coalbed methane company US Realm Powder River wrote in a filing in the U.S. Bankruptcy Court for the District of Wyoming, that it would be best to just call off the company's now-15-month bankruptcy altogether.... more

A state legislative committee advanced a bill Wednesday to impose a requirement for voters to show photo identification at the polls, all but guaranteeing it will pass when it goes to the floor next month.... more

With the decline in the coal, oil and natural gas industries, and Wyoming’s reliance on those industries, state lawmakers and residents will have a choice to make in the near future.... more

The Yellowstone Ecosystem grizzly bear population fell by 10 bears from 2019 to 2020 and now numbers 727, according to new estimates from an interagency team of scientists.... more

Several snowboarders and snowmobilers have gone into the backcountry in western Wyoming in recent days and not come home.... more

Compared with 14 years ago, a lot more women are in prison.... more

As a bill that would push the creation of a new community college district in Campbell County to a public vote sits with the Legislature, previous expressions of support from the Northern Wyoming Community College District are waning.... more

Cheyenne Police have a suspect in the death of Athian Rivera, a 2-year-old found dead Friday in a dumpster in the 400 block of Desmet Drive.... more

Over the last two decades, Indigenous people have made up 21 percent of homicides in Wyoming, despite accounting for only about 2.7 percent of the state’s population, according to a new report discussed this week.... more

Voter fraud is exceedingly rare in the United States.... more

Briefs from across Wyoming.... more

An investigation into racist interruptions during a virtual Black History Month event last week at the University of Wyoming has found that one of the perpetrators was using a Maryland internet provider, a university official said Monday. ... more

The owner of a Powell area group home for troubled teenage boys is facing a criminal charge of child endangering, after one of the teens in his care reportedly suffered severe frostbite last fall. ... more

Greater Cheyenne Chamber of Commerce CEO Dale Steenbergen pushed back against claims made last week by state Sen. Anthony Bouchard, R-Cheyenne, that the chamber is seeking a list of Wyoming gun owners in an ongoing case being weighed by the Wyoming Attorney General’s office.... more

As Powder River Basin coal continues to take a pounding with production down about 22 percent last year over 2019, the local industry quietly passed a milestone that represents the importance of thermal coal to the region.... more